Things I've experienced for the first time over the past few days:

The first 200 pageviews:
I never really knew what to expect when I started this blog (although I promise a posting in the next few weeks about why I started it), but it has been fun to see my "self-esteem counter" hit and surpass the 200 count.  And I have official followers!  You like me, you really like me!

Sorry - we've been watching last year's season of Brothers & Sisters on DVD, so I'm on a Sally Field high.

My first pumpkin pie:
I had never made one of these before Thursday, although it was surprisingly easy.  We're still enjoying the leftovers this weekend, and I plan a repeat performance at Christmas.  And a hat-tip to our friend, Sarah L., who suggested using my stand mixer to beat up mounds of whipped cream awesomeness that is a perfect pairing with this puppy. 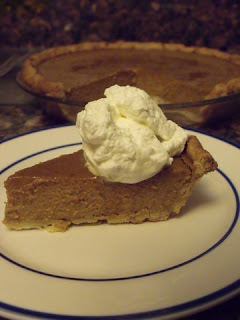 The first holiday party of the season:
We were invited to Greg's wonderful cocktail party at his home off the Mile with several former colleagues from my prior job.  While I've kept in touch with everyone through Facebook, I hadn't seen some of them since I left two years ago, so it was wonderful to catch up in person over good nosh.  Though Greg and I never actually crossed paths work-wise, we've connected through some of our volunteer committee work, and it was great to meet his boyfriend.

My first full meal at a great Indian place called _________:
After said party, we headed over for dinner at an Indian restaurant that - for the purposes of today's posting - I'm going to call Johnny Drama's, because I don't want to give them a bad rap unnecessarily, when we actually had a good time last night, but where we've experienced drama in the past.

See, a few weeks ago, we went with our friend, M., to Johnny Drama's for dinner - my first time there.  M. is severely allergic to nuts, and was very clear with the staff about it.  When our food came out, we confirmed that they got it right with her main course.  Unfortunately, they didn't get it right when it came to one of the dipping sauces, which had ground cashews in it, and which they didn't know or confirm until she had already eaten some.

Whatever portion of the dipping sauce M. ate probably did not have an actual chunk of nut in it (or I would probably be posting a much more morose story), but she immediately started to experience difficulty in swallowing.  Even after swigging back three Benadryls, she was in increasing discomfort, so we left Johnny Drama's in a hurry (leaving a barely-eaten meal behind) and headed over to Northwestern Memorial, where we spent the next three hours in the emergency ward as they pumped her full of steroids to bring down the swelling.  Thankfully, she survived (relatively) unscathed to tell the tale, except for the big hole in her arm where they inserted the IV.

Lessons learned:
The silver lining to this story is that M. read the riot act to the restaurant manager, and got us a free dinner.  Which we thoroughly enjoyed last night, with copious leftovers for this week.

I cooked mussels:
I took some inspiration from my younger sister, who has settled into marital bliss by becoming a very adventurous cook, and decided to cook mussels for the first time.  A few years ago, Matthew and I went to the Ocean House in Cape Cod, where we had the most amazing mussels ever, cooked in sake with cured Chinese sausage.  We'ver never stopped thinking about them, so for my inaugural mussels adventure, I attempted to recreate it, adding garlic and ginger, with a multigrain baguette to soak up the broth.  And it was awesome. 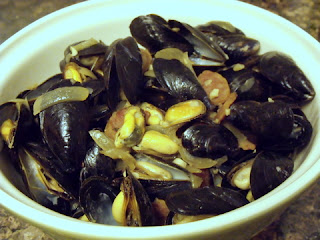 My first (and hereafter only) ninth anniversary:

Our anniversary is at a tough time of year because it's so close to the holidays - and has actually been on Thanksgiving itself in the past - so being able to celebrate it at home, by ourselves, was wonderful.  And its only competition this year was my Black Friday shopping, which was restrained, as predicted, although I did pick up a pair of snazzy Sugoi running pants that will make it just the teensiest bit easier to separate myself from the bed in the cold winter mornings... 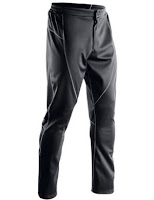 So apparently the traditional gifts associated with the ninth anniversary are willow (?!) or pottery.  Let me just preempt you by saying that willow (tree, Palin or otherwise) does not go with anything we have.  So go with pottery.  I'm just sayin'.
Posted by Christopher at 11/28/2010 09:40:00 PM

Here is a link to her blog with the story of the first time she made one - cracks me up!

That's hysterical! She was clearly more adventurous than me, though - I just opened a can of puree. Still, it reminded me of a friend of mine, who made her first foray into edamame thinking that she had to eat the pods, too...