Seinfeld didn't mean it this way when he said it, but today I am Master of My Domain, thanks to my wonderful friends, Dan and Meredith, who very thoughtfully secured "The Wizard and I" for me this week.  So while you, gentle readers, probably noticed no difference in getting here if you've bookmarked the prior link, yours truly will be broadcasting from my very own home on the WWW from henceforth.  And while seasoned bloggers will probably laugh at me for saying so, I think that is frakkin' awesome.

I've known Dan since high school when he was a ridiculously cool band geek with an earring, and I was the incoming freshman with no personality and a strange accent.  In the twenty years since we've known each other, I've lost the accent, and he lost the earring.  Can't say much about my personality.  And even though we don't get to see each other more than once or twice a year, I always know that I can depend on him through thick and thin, and he's just a phone call or an e-mail away.  Which really came in handy today, since he even helped set up the new domain for me.  (I consider myself tech savvy - but not that tech savvy.)

Even more good friends
On top of Dan and Meredith, this has been a very friend-centric week.  (Hence the lack of postings and dwindling readership.)  I always love this time of year, because even in the midst of waging all-out war in the mall parking lot gift shopping, writing Christmas (and other non-holiday-specific) cards, and baking up a storm, I really enjoy the opportunity to see good friends amid good cheer.

Like Cynthia, who was in town briefly for a conference, but still made time to meet us for dinner, where we reminisced about military parades, bad conductors, and good times on the road - that schlep between Montreal and Prince Edward Island, or the all-too-frequent trip that I dreaded between Montreal and Ottawa in the summer, because it meant being away from Montreal at a time of year when it was really cool to be there.  And while Cynthia and I hadn't seen each other for more than ten years, it was just like old times.

Or Lisa, Amy and Carol, who - bless her heart - went early to the Walnut Room to get us a spot in line for dinner, because everyone and their uncle wants to have dinner at the Walnut Room at Christmas.  (Note to Macy's - those pseudo-snow-falling track lights look more like worms running down the tree.)  Thankfully, we got a table in a quieter part of the restaurant that was much more conducive to catching up.

Baking
So even though I've found myself doing things a little later than I would like (um...those of you on my ever-shrinking list of holiday card recipients might see yours showing up a wee bit after Christmas...2011), I spent much of today churning out a few holiday goodies, or at least preparing the dough for cookies to be baked later this week in the mad rush to Christmas.  On this year's list:
And these pretty puppies - "snow-capped" macaroons: 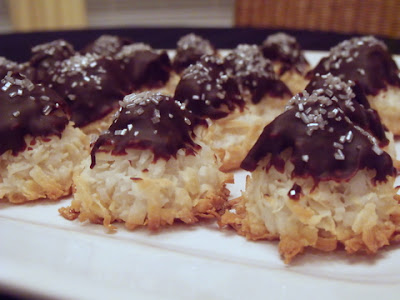 The cookies look amazing. You must have an excellent taste tester.

Thanks! Yes, I do, indeed, have an excellent taste tester, which comes in handy, since I don't have much of a sweet tooth myself. But then again, I think he may be a wee bit biased...