Weak eyesight runs in my mom's side of the family.  My mom and her siblings all wear glasses (except those who've had Lasik), so it was no surprise that I would need glasses at some point.  I managed to stave it off until I was in tenth grade, when I found that it was becoming increasingly difficult to see clearly.  At the time, I thought it was because I was spending too much time in front of a computer learning Turing, a now-extinct programming code that I used in my computer class to build a tres-gay database of 1992 Olympic gymnastics and swimming results, complete with text-character recreations of the Olympic sports symbols.  But - alas, no - it was just my myopic gene finally catching up and having its dastardly way with my vision.
And my eyesight must have been really bad, because apparently I couldn't see that the first pair of glasses I chose for myself were horrendously ugly.  I'm talkin' square-cut, old-school, never-gonna-get-kissed ugly.  And, horror of horrors, I had them for the next four years.  It was like they were their own form of birth control.
(To give you a sense of how ugly they were, when I got military-issue glasses a few years later, they were almost an identical match to my own.  Yeesh.)
I finally got new glasses in 1996, when I went through my Shaolin monk phase, because in a undecided crazy moment about what to do with my hair, I had my stylist shave it all off, leaving about an eighth of an inch all around.  But because my hair seems to have a life of its own and grows outward, rather than close to my head (hence the copious amounts of product I use on an annual basis), I had to get it buzzed every three weeks to avoid looking like an Asian chia pet.  And nothing would have said loser like my big square glasses on my big Asian chia-pet-like head.
Cut to 1997, when I decided to try contact lenses, and I haven't - sorry, pun alert - looked back.  And since the optometrist was okay with giving me a free sample pair so I could ostensibly try them for future purchasing consideration, I took some colored contact lenses that were green, so I could be just like that fulfilling-a-legend Asian girl in Big Trouble in Little China and cause men to chase after me.  (1986, Kurt Russell, because the white guy has to save the day when Asians apparently can't.)  But - argh, foiled again! - my eyes being naturally dark negated the color in the contacts, meaning that no one could tell that I now had cool, butt-kicking green eyes but lonely ol' me and my very unresponsive mirror.  Sigh.
I've never considered Lasik, because I'm too squeamish about the thought of a laser cutting into my eyes.  Bleh.  So every morning, I roll out of bed, load up my two-week disposables and see as clear as day for the next 12 hours.  And save for one little incident involving jalapeno peppers*, I've been relatively problem-free with contacts ever since trying them out.
I still have glasses, which are thankfully a wee bit more trendy than the ol' honkers I had in my teens, and which I use at night or when we're flying (because the dry environments of planes suck every drop of moisture out of my eyeballs and skin).  And I like having glasses with fitted magnetic clip-on shades, so that when we step out of the airport into the (preferably) bright sunlight of our destination, my eyeballs aren't scalded.

So, apart from boring you with the mundane history of my poor vision (which has apparently - thankfully! - plateaued for now), the whole point of this posting is - to show off my new glasses!  Even though I don't wear them often, I got the "Cadillac" package:  polycarbonate lenses (equals lightweight), anti-reflective, semi-rimless, blah blah blah, which - thanks to my insurance - didn't cost me a month's salary as I had feared.
﻿ 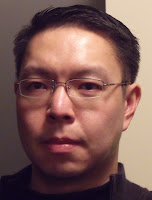 
* A few years ago, in an attempt to undertake new culinary adventures, I made the rookie mistake of dicing jalapeno peppers with my bare fingers while trying to follow an overly-complicated recipe for quesedillas.  Even though I washed my hands thoroughly (or so I thought), when I went to put in my contacts for an event that night, I seriously thought my eyeballs were being burned out of my head.  (Ask Matthew - he remembers the blood-curdling screams.)  Needless to say, I wore my glasses that night, and now there's a bottomless box of disposable gloves in our pantry for handling those fiery frakkers.
Posted by Christopher at 12/12/2010 11:30:00 PM

I remember the monk phase from your days in YMX. Unfortunately, the one photo I have of you back then is without glasses. I'd upload it, but you were also wearing slippers ;-)