I didn't mean to spend almost the entire day in the kitchen, but with the Martin Luther King holiday and long weekend - which is much appreciated so soon after Christmas - I decided to do some major food prep work on Monday for the week ahead.  I've been trying to do as much as I can in advance on the weekends, so that weekday dinners are easy to throw together when I drag my tired butt in the door.

But first on the agenda was dealing with six pounds of ground pork that I had been stockpiling in the freezer for a few weeks to make a serious batch of shu-mai. 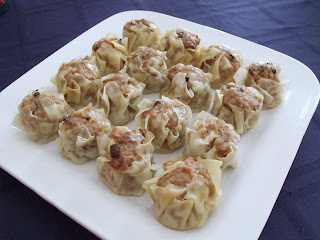 My grandmother is an amazing cook, and never more content than when seeing her family enjoy her food.  While she's in good health, she's getting up in years, so she doesn't have the energy to make her legen-(wait for it!)-dary shu-mai very often.  In the past, when we visited, she would give us a batch to take home, which we would store in the freezer and ration ourselves to just a few every few weeks until they were all gone - to our great disappointment - and until our next visit.  And whenever I told my grandmother that we were hoarding them, she would always feign horror ("Eat them up, eat them up!"), but I think inside she was so proud to know that we enjoyed them so much.

So a few years ago, in an attempt to stave off the crazy hankerings we would get during our shu-mai droughts, I asked my grandmother to teach me how to make them.  She had never actually written down the recipe, and I'd never seen her make them, so I roped in Matthew as annotator to capture the ingredients while I got my hands dirty next to her.  I think she got a big kick out of having one of her grandkids - the gay one, to boot - listening so intently to her.  And with Aunty M. - the chemist - "translating" some of the concepts into actual measurements, we got pretty good instructions that I've been able to use whenever I've got, oh, a few hours to kill.  And a whole lotta ground pork.

So on Monday I ended up with almost twelve dozen of these pretty puppies.  And even though we had to taste test...ahem...a few - you know, just to make sure they were okay - I still managed to pack away a good number in our freezer for the coming weeks.

Chicken!
So if you read my Thanksgiving post, you'll know that I've never actually roasted a bird, even though it's apparently the easiest thing to do.  I do a lot of cooking with chicken - mainly boneless, skinless breasts, because neither of us likes bones in meat - but I decided to take a page from my mother's book and bought a store-roasted rotisserie chicken for the first time this weekend.  And in following my Everyday Food magazine (one of my two Martha-branded subscriptions), I shredded and prepped the chicken for a chicken and spinach casserole that we enjoyed that night next to a batch of oven-roasted Yukon Golds, and chicken with couscous and orange that I threw together last night in under ten minutes.  (I'm not a huge fan of mint, so I used scallions instead.)  With plenty of leftovers to spare, one rotisserie chicken ended up as four meals.  Awesome.

Sausages!  (well, kinda)
Turkey sausages were also on sale this weekend, so I grabbed two batches.  As I've been doing recently with any type of sausages, I cooked them all at once, and put small batches in freezer bags that I can defrost overnight for dinner the next day.  Two minutes in the microwave, and voila! dinner is ready.  ("Voila" being French for "Could this be any easier?" - emphasis a la Chanandler Bong.)

Apples! Cranberries! And Special Guest - Blueberries!
I love this apple-cranberry crisp, again from Everyday Food.  And since Braeburns were on sale this week, and I had stockpiled some cranberries in the freezer when I had thought I would use them in my holiday baking extravaganza, it was a good time to crank it out again.  And for good measure, I threw in some blueberries - that have held up remarkably well in the freezer - from our summer picking with M and J.

So after hearing about all of my productive cooking adventures, someone at work asked me what my freezer looks like.  And being the obliging fella that I am, here it is, in all its overflowing, probably-energy-inefficient, frozen-food-gloriousness.  And no, you're not going to find money in my freezer - because there's no space. 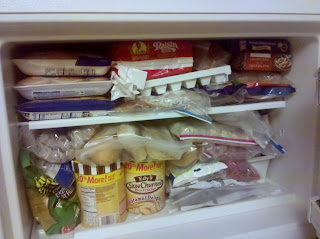 Great story about your granny's dumplings.

I especially like how the ice cubes fit in the freezer. And is that *two* buckets of ice cream? I'm jealous.

Yeah, the ice cubes are pretty much an afterthought these days, taking up valuable freezer real estate. And when ice cream is buy-one-get-free, you know I ain't turning it down.

I admire how well you stuff your freezer, but I think you'd be equally amazed at how much MEAT from Joel's father-in-law (aka, my dear ol' dad) is in ours! I need a second freezer, the way that man feeds my hubby!! I'm loving your blog, my dear friend!

Thanks, Margo! I've been contemplating a second freezer, but don't want to end up with any UFOs (Unidentified Frozen Objects), as my mom would say.

Re Chicken: you can stretch it out even more by taking that carcass and making stock with it! I roasted a whole chicken last night and after a couple of days of meals will be throwing it into a pot with carrots, celery, onions and bay leaf. Any herbs I put in go in a cloth sac. Simmer for a couple of hours then strain. You can still get some extra meat from the strained part. Put the broth in the fridge over night then skim the solidified fat off the top. If I'm not going to make soup or stew right away I pour two cups worth into freezer zip lock baggies. Squeeze the excess air out and they lay flat so they stack nicely in the freezer. You always know how much stock you have because each baggie contains two cups. Easily defrosted in the microwave then into a pot with veggies and such.
You should never waste a poultry carcass!

Thanks, Pat - excellent tips. I've also taken suggestions of putting chicken stock in ice cube trays so that one can add a cube to a sauce and whatnot. Now - if only I had space in the freezer... :)