Pat was a lifelong Chicago resident.  At the time she and Matthew first met as neighbors across the hall, she was in her 70s, had long since retired from her secretary job, and was happily volunteering as a reader for the blind.  She was always impeccably dressed (sometimes in dresses that she knitted herself), with her grey wig placed perfectly on her head.  She never had an unkind word about anyone, not even the bike messenger who knocked her over on the sidewalk one day.  She walked everywhere from her South Loop apartment, enjoyed a strong martini with lunch, and chuckled when she told us how much she liked her evening hot toddies.  At one point, she had season tickets to see her beloved Bears and Cubs, but gave them up when she said that she could stand the disappointments anymore.  And when they were neighbors, she would often write a friendly note in her timeless cursive handwriting, and slip it under Matthew's door with a newspaper clipping or a joke that she thought he would enjoy.  Even when he moved, those wonderful notes would follow him from time to time.

For the first few years that Matthew and I were together, we weren't sure how to tell Pat about me.  So they would go out, just the two of them, and I didn't want to intrude on their catching-up time.  But, gradually, I was introduced as a friend, and while I'm sure she figured it out soon enough, she accepted me as warmly as she did Matthew.  We took her to see her favorite Peter, Paul and Mary at Ravinia twice, and, when we had a car for a day, we would chauffeur her to and from our home for dinner.  As was her custom, she would send the warmest thank you notes the very next day.  And from time to time, we would get a batch of her world-famous lemon squares that she could probably bake in her sleep.

The first time I met her, she told me her real name was Vlasta, which is apparently Slovakian for Patricia.  She was typically very guarded, and never wanted to dwell on any unpleasant subjects for long, but, over the years, she would slowly reveal more about herself.  Like the fact that she and her sister became orphans when they were young children.  Their father died at a relatively young age, and their mother had a breakdown from having to take care of two children during the Depression era.  They came back from school one day to find that their mother had packed some belongings in suitcases, and she took them to an orphanage.  They would see their mother infrequently until she passed away a few years later.

Another subject she didn't talk much about was her bout with breast cancer in her 70s, even though she underwent successful surgery, and went into remission without any additional treatment necessary.  It was a disease that claimed her sister, but she never betrayed any doubts or fears for her own mortality, probably because of her faith.  She was a devout Catholic who attended mass daily, and she must have had a direct line to God, because whenever you were added to her prayer list - with your name written in the tiniest handwriting on the tiniest piece of paper in her purse -  miracles happened.  Like when it seemed as if my green card application had been languishing in limbo forever, we mentioned this to Pat and she added me to her list; just a few weeks later, my card arrived in the mail.

In August 2008, we had planned to take her out for a late birthday celebration.  We called to confirm the time, and while we were a little worried when he hadn't heard back from her, we thought that maybe she was just busy.  Still, we had a nagging feeling when we made our way downtown to her apartment building.

We knew something was wrong when the doorman wouldn't call up to her apartment, and wouldn't tell us why, so we went to the building manager's office, where we were told that Pat had passed away that week.  She wouldn't tell us much more than that, but, as we were leaving, a building resident who had overheard our conversation with the doorman stopped us and filled in some of the details.  Apparently, Pat's neighbor across the hall had left a note on her door.  When it wasn't taken down the next day (as Pat was a habitual early riser and would always go downstairs to the convenience store for her daily Sun-Times newspaper), the neighbor became worried, and called building security.  They discovered her body.

It wasn't until her funeral a week later that it really hit me that she was gone, because the first of many tears I shed for Pat were when her coffin was being wheeled out, covered with flowers, and I thought about her tiny body in that very big coffin, and how she had died alone.  Our only consolation was that if we hadn't planned on that August outing with her, we might not have known about her passing until perhaps weeks or months later, and we could have missed her funeral altogether, which would have been even more devastating.  At least we had a chance to say goodbye.

We'll probably never know how she died, as we don't know her two nieces in California, nor anyone else who was close to her.  She was buried in a cemetery on the very far South Side, and some day we hope to visit her grave.  We're lucky to have taken some wonderful photos with her that we treasure.  And sitting in our freezer are the very last lemon squares she ever made for us, because we just haven't been able to part with them quite yet.


I still wonder what happened to the coffee mug that we gave her for Christmas, with this photo of the three of us from one of our Ravinia outings.  She was so excited when she opened it, saying that she would have coffee every morning with "her boys."  And even though we never came out to her, we sometimes joke that Pat's looking down from her perch in the sky - sitting right next to Mary Travers - saying: "You fools - I may have been old, but I wasn't blind."

But, most often, I just remember how special she was to us, and how much we both miss her. 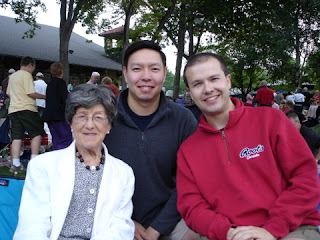 Email ThisBlogThis!Share to TwitterShare to FacebookShare to Pinterest
Labels: friends

I swear, it's these sorts of amazing connections in our lives that make it worth living. They come, they go. As we ourselves do. What a great story.

Thanks for reading! We were just glad to have an opportunity to know her. Pat was really in a class of her own.

You made me cry! This is such a sad, happy, poignant, real part of life x