Pseudo-Narcolepsy
So I've been burning the midnight oil for the past few days working on a pretty significant personal project (more on that in a few weeks), so I haven't been able to get to the blog for a while.  Sigh.  But it's certainly not for lack of want.  And because I've been pretty tired recently, I've managed to fall asleep in the strangest of places.

Like the dentist.  Seriously, who falls asleep while visiting the dentist?!  Apparently - yours truly.  With my big mouth open.  And not - say, for instance - while the dentist was looking over x-rays, or getting his equipment ready, or the moments between the relentless scratching and the buffing of my not-so-pearly whites.  Oh no - it was literally while he was cleaning my teeth.  Zzzzz....

Or while getting my hair cut last night.  Though this happens pretty much every time (and my stylist knows it and doesn't mind), I think it's pretty funny that I manage to catch some shut-eye while someone is moving around me with a sharp pair of scissors.

I'm not sure why I manage to fall asleep in these strangest of places.  It's probably because it's a block of time where I can't do anything but sit (or recline) and enjoy the attention.  Can't read, can't watch TV, can't check the Blackberry or e-mail.  And I think everything just shuts down and I fall asleep faster than if I were...watching the Superbowl.  (Which I didn't watch...in case you were wondering.)

Also, at my semi-annual check-up on Friday, I asked my dentist to check out a tooth that has been giving me some discomfort lately.  Because it's been sensitive to cold, I was worried that I would have to shell out for another root canal (I've only had to endure one thus far), but it turns out it's just an exposed nerve, so I've resigned myself to having to use Sensodyne toothpaste to desensitize the tooth for the next month, and even longer.

Snow Day...s!
And since everyone in the Midwest seems to be talking about snow and the wind and the cold in their blogs these days, I will do my civic duty and hop on the snowblowing wagon.

My first experience with snow was at 13.  Having spent my childhood years in a fairly moderate climate, I was excited and ready for my first snowfall, with a massive, reversible down jacket (blue on one side, turn it inside out and - voila! - it was red), calf-length black lace-up boots, and massive ski gloves.  So, at the first sign of snow, I got decked out like an abominable blue snowman in all my snow-related paraphernalia, and headed out to school.  But no one told me I didn't need all that stuff when there was only half an inch of snow on the ground.  And it wasn't even that cold.

Ever since, I've always loved winter, and will happily admit to being a snow bunny from the Great White North.  I'll take snow and wind with negative temperatures anytime over a 100-degree day in the summer.  There's something I find tremendously peaceful about snow - the way it just coats everything in clean white flakes, hides the dirt (albeit temporarily), and dampens city noise.  I don't mind shoveling, and you know how butch I feel using the snowblower.

But I've never had a snow day before - until last week, when the blizzard hit, and we unexpectedly got two snow days in a row.  (Well, let me rephrase that - I've lived through an ice storm that shut down my college for about a week in 1997, but it was due to ice, not snow.  Another posting for another time.)

Thankfully, my office closed early the afternoon that the storm hit us, so I was able to make it home in good time.  We awoke the next morning to more snow than I've ever seen before.  With the way the wind blew that night, several patches of our backyard were completely clear, but we had five-foot drifts in other places.  The same thing happened in the alley, where we discovered drifts that were higher on our side than our neighbors across the way. 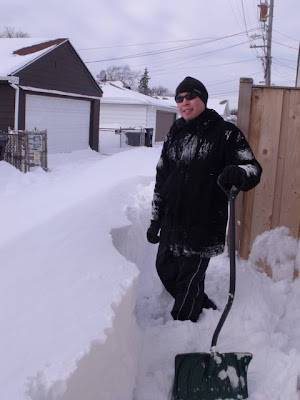 Several manly hours with the snowblower and shovel - decked out in my updated all-black abominable snowman ensemble - and we had cleared the front of the house, and a small pathway to get to the trash cans, at the very least.  And with the clean lines of the snowblower up and down the sidewalk and driveway, it looked liked a little maze running through the piles of snow.
At the end of it all, the blizzard ranked the third worst in Chicago's weather-recorded history with 20-plus inches.  And I loved every single minute.
Posted by Christopher at 2/09/2011 10:51:00 PM

Email ThisBlogThis!Share to TwitterShare to FacebookShare to Pinterest
Labels: childhood

Holy crap. I guess I should stop complaining about the snow in Toronto.

...and I sometimes fall asleep at the dentist as well.

My dentist is great - he's very quiet and deliberate, and doesn't talk much. Add that to the NPR playing in the background, and it makes for a very soothing environment. And I don't get freaked out at the dentist like a lot of folks, so next thing I know...zzzzzz....