So I know last night's post was perhaps a bit sentimental, but it really felt great to get it down on paper, per se.  It's stuff I've been meaning to write about for a long time, so it was - as with most of my writing - cathartic.  But it also prompted me to look back at the letters my grandfather wrote to me, and I came across the last gift he bought for me - a Princess Diana memorial coin, of all things.  It was great to look back at the years of correspondence that I've saved, and honor his memory, especially on the occasion of his birthday.

That being said, tonight I'm going to lighten the mood a bit, beginning with....
﻿﻿﻿ 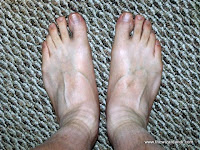 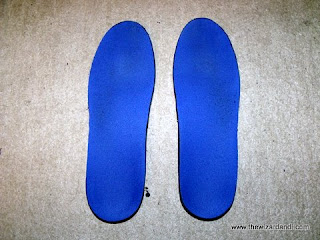 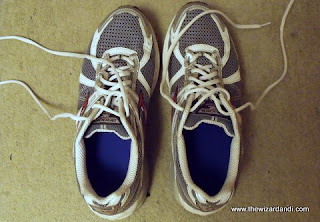 Okay, well, not quite Happy Feet, but darn near close.

I've been an on-and-off-again runner over the years, but in recent years I've been tending through a cycle of running, experiencing pain (shin splints, in particular), needing to take a few months off, gaining weight, and then trying to get back into running again to feel better about myself.

So in October last year, when I was going through somewhat of an existential crisis that prompted me to start this blog and a valiant attempt to take better control of my health, I kickstarted the running after several months off from the last shin-split debacle, only to experience pain again.  A colleague of mine had had a video gait assessment (where they record you while walking and running) to diagnose some pain issues she was experiencing, so I thought I would give it a shot as well.  The diagnosis for me was severely pronated ankles, i.e. I'm tragically flat-footed, which was causing the shin splints. I would never have thought the two would be connected, but hey! that's the human body for ya.

So after a visit to my doctor, who referred me to a podiatrist, who took a cast of the pasty white feet you see above, I got my very own pair of customized orthotics - the blue "inserts."  I've never had orthotics before, and they are like Walking. On. Air.  Which is surprising, because the base of the orthotic is actually a very hard fiberglass, topped with a cushioned sole.  Still, they are amazing, and I can definitely feel the support under my arch, and from not having my ankles roll in when I take a step. 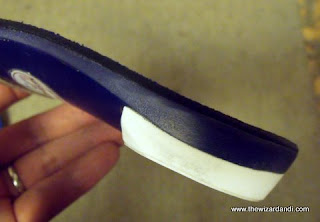 Plus I gain about a quarter-inch of height whenever I have them in my shoes.  Yes, I'm the new Kim Jong Il.  Just minus the perm.  And the dictatorship.

The podiatrist also referred me to physical therapy, which I've been faithfully attending for the past three months, and working through a series of strengthening exercises and ultrasound (to reduce any inflammation).  And for the past three weeks, I've been able to actually start running again, although it's mostly a combination of walking and a light jog for now, and only for 30 minutes at a time.  Still - I've been painfree, which is simply amazing.  And even though every fiber of my being is aching to run faster and longer, I've had to keep it in check to ensure that I don't push myself into injury again.  Baby steps.

So while I think my goal of running a marathon this year will probably have to be shelved until I feel more confident about my legs' ability to handle it, I feel so much better in finally getting a diagnosis for what was wrong, and actually being able to do something about (thank you, health insurance!).  And even though I'm having to take it slow, I'm just glad to be rocking out with Celine again in the morning.

Email ThisBlogThis!Share to TwitterShare to FacebookShare to Pinterest
Labels: running