In my division at the office, we like to take the time to celebrate each other's birthdays, even when things are crazy (as they currently are while in preparations for our big annual event).  We try to surprise each other, but most of the time the surprisee can generally see it coming from a mile away.  (An unexpected meeting - why, sure!)

This past week it was yours truly's turn to ante up the goods.  Now, I still feel a bit guilty from last year's cake fiasco for this particular colleague, because, in all honesty, what I made wasn't very good.  I had tried out a recipe for the first time for a dark chocolate cake with ganache frosting, but neither turned out very well:  the cake was dry, and the frosting ended up being very heavy.  And while I love my colleagues for not complaining, I've had baking anxieties ever since.  Don't know why - probably Asian guilt.

So this year, in the midst of work craziness, I know I could have simply bought something to ease the panic.  But I didn't, because I still have my pride.  And something to prove.

So the question was - what to make?  Fortunately the birthday surprisee had reminded me earlier in the week (in an unrelated conversation) that she has given up chocolate for Lent.  Or maybe she just told me that as a pre-emptive strike against any re-attempt at the tragic chocolate brick that I produced last year.

I had bought a bag of limes at Trader Joe's the prior week (as I like to have either lemons or limes on hand in case a recipe calls for them), and had a few of them left, so I found myself fixated on producing (non-Key) lime cupcakes.  And a brief search on the WWW led me to make these lime-coconut cupcakes with mango frosting. 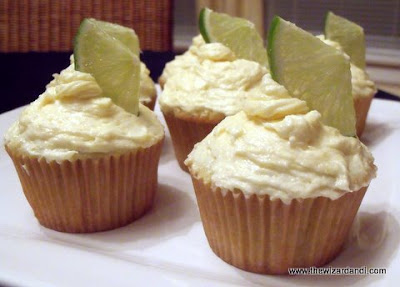 I can't take credit for the recipes, to which I've linked above.  The lime-coconut cupcake actually comes with a recipe with a white chocolate frosting, which I would have liked to have tried, but didn't, because (a) chocolate was verboten this time around, and (b) I don't stock white chocolate in my pantry on a regular basis. (Oh, and I added a few drops of green food coloring to the cupcake batter in keeping with the lime theme.)

But what I can take credit for is the half-assed frosting job.  Seriously, I simply suck at frosting.  It's probably because I don't have the right tools (wah, wah, woe is me), and, since I don't make cakes and things that need frosting on a regular basis, I don't get a lot of practice.  This frosting's sad story is that I made it the night before the cupcakes, then microwaved it for a few seconds after it had been in the fridge overnight to get it to a spreadable consistency.  I dug out my cheapo, rarely-used frosting kit, lined the inside with a funnel of wax paper (which really helps cut down on the clean-up), and got it all filled with frosting and ready to make wonderfully big swirls of mango-flavored buttery and sugary heaven...only to find that all my available tips were too small.  Sigh.  It's been that long since I've used the frosting kit that I had forgotten its shortcomings.

And so the stupendously horrible frosting job above was accomplished with the back of a spoon with a few passes of a four-inch spatula that was really not helpful.  But since I had filled the frosting bag already, I was at least able to use it to put a little rosette at the top to help stabilize the slice of lime for presentation.

But in spite of the sad looking frosting, the cupcakes themselves were a hit.  My taste tester - as biased as he may be - said that they were among the best cupcakes he had ever had, and everyone at work seemed to really enjoy them.  The coconut helps add moisture to the cupcake, and even though I am not a huge fan of frosting (neither eating nor manipulating), the mango added a bit of fruity tang that made it quite pleasant.

Email ThisBlogThis!Share to TwitterShare to FacebookShare to Pinterest
Labels: cooking