There are things that are good when blocked.  Like leaking pipes.  Or holes in canoes, or dams for that matter.  Spam e-mail or telemarketers.  Bad memories.  People who try to friend me on Facebook simply as a means to boost their friend count.  The kids who used to use our backyard as a shortcut, until we installed our six-foot fence.  Faux News.

And then there are things that aren't so good when they're blocked.  Toilets.  Arteries.  The end of our driveway, by the morons who are apparently blind, and oblivious to the fact that they're blocking a driveway (which has also happened when friends of ours had parked their car in our driveway).  The doors to a Wal-Mart on Black Friday.  The doors to a crowded train, by the idiots who don't move out of the way for those trying to get on or off.

Not sure what it is, but I've hit a bit of a blogging dry spell over the past week and a bit, hence the radio silence.  And the crickets chirping.  Plenty going on in the world and in my life, but the writing has not been forthcoming.  And I always feel that I should write something of substance, hence the four half-finished draft posts in my virtual outbox because I'm horrified by their tragic awfulness at the start.

But, over the weekend, with a morning run out of the way, a partner occupied by work, and several discs of Battlestar Galactica beckoning, I put in a few hours in the kitchen to process some food for the week and catch up with Starbuck, Apollo and Adama.  And with the dearth of snarky humor, adoption-related postings, or other musings, I will simply share with you with my recipe for meatballs, which is based on a Mark Bittman recipe.

2 lbs of ground beef (or any other ground meat, like pork or turkey, or any combination thereof; I use 95% lean beef, which is good for lower fat content, but requires more seasoning for taste)
1 cup of bread crumbs
1 cup of light cream (or milk)
1 half-cup of raisins (if they're hard, soak them in warm water for a few minutes to revive them)
2 eggs, beaten
Salt and pepper to taste
Other herbs and/or seasonings of your choice (the Bittman recipe calls for parsley, of which I am not a huge fan; I added some Worchestershire sauce instead)

Soak the bread crumbs in the cream for 5 minutes.  Mix all ingredients in a bowl, and form into the meatball size of your choice (I prefer walnut-sized meatballs - they cook faster and are easier to eat).  Brown the meatballs on all sides in a non-stick pan for just a few minutes - they don't have to be cooked all the way through, because they'll finish in whatever type of sauce you make.  I love adding raisins to these meatballs, as they add a moist sweetness to the mix.  These proportions of ingredients make about 50-60 meatballs, which, in our household, is enough for two five meals. 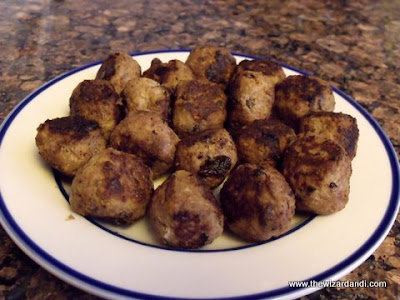 Everything has seasons. The writing, the creativity, the cooking, the gym routine, the work, life...it all feels great some days and like crap the next. Relax. Write when you can, and want to. And don't, otherwise.

Fortunately you haven't committed to daily, weekly, or any kind of regular updates so don't think you're letting yourself down. Besides, just like calling a meeting, writing is best when there's something to be said, not just for the sake of saying something.

The meatballs sound yummy, but left me wanting more... like what sauce did you use?! (and the meatballs *do* count as something that needed to be said!)