The past two weeks have been a bit of a whirlwind, including a visit from the in-laws, and my first trip to San Francisco over Memorial Day weekend.  And thanks to a partner who always does an amazing job of planning our trips, we were able to hit all the major sites, despite my having caught a doozy of a cold on the Thursday that we left ORD.  By Friday, my voice had dropped an octave, and the chills hit me on Saturday.  And I'm still hacking up a lung a week later.  And hating the taste of cough drops even more than I did before.  Bleh.

First, a word about the actual flight down there.  This was my first time flying on Continental, which included confusion about where to check in because of the merger with United, a 1.5 hour delay, and one of the most uncomfortable flights I have ever experienced.  Scrunched seating, hardly any legroom (I'm only 5'9 and my knees still backed into the seat in front of me at all times), bad service (the first time the beverage cart made an appearance was about two hours into the flight) - ugh.  Never. Again.  As it is, we only fly United when absolutely necessary, a plan to which we will continue to adhere, to the greatest extent possible.  On the flight back, we were at least able to switch to aisle seats, which was slightly better, but not much.

We stayed at the Marriot Marquis, which was very conveniently located in the Union Square area, and a stone's throw away from the Powell BART station (the commuter train from the airport, which, at $8.10 per person each way, is still cheaper than a cab or shuttle bus).  We had requested a large corner room (thanks to Matthew's research), which was far from the noise of the elevator (and foot traffic), and gave us a great view of Market Street and the gate to Chinatown a few streets up.

We took three rides on the iconic (yet expensive) cable car, which was an adventure in and of itself.  The line to get on was extraordinarily long each time, and at $5 a pop (cash only), it's not cheap.  Still, it's hard not to enjoy the open air ride (although we had seats each time), especially as you get close and personal with your neighbors when you go up and down the hills.

﻿ ﻿ Apart from the barely-passable Caesar salad from CVS (because I had a fever and couldn't go out for dinner), we ate pretty well, with an emphasis on Asian food:
We also took several walking tours (oy, the hills!), including Lombard Street, the Castro, Chinatown, Japantown, the Mission District, and the amazing farmers' market at Embarcadero.

And on Sunday night, we caught the last of the preview shows for the musical adaptation of Tales of the City at the American Conservatory Theater.  While I enjoyed the show overall, I'll have more to say about it in a subsequent posting.

And by Monday I had recovered enough from my cold that we were able to rent bikes, bike over the Golden Gate Bridge to Sausalito, and catch the ferry back.  An amazing - albeit chilly - bike ride. 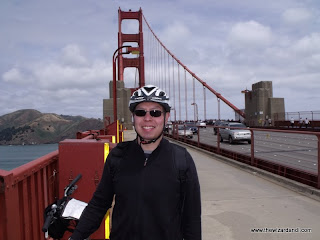