When I was packing my stuff from the house and moving into my apartment last year, I lost about eight pounds in seven days.  I was so busy packing or running to the Bed, the Bath and the Beyond, stressed out emotionally, and didn't have a working kitchen, which meant that I was either not eating, or eating very lightly.  It probably wasn't healthy for me to lose so much weight in such a short time.  But I was the leanest I had been in years.  To paraphrase from one of my favorite movies - I was one divorce away from my goal weight.
I've since managed to put back on that weight, although I am trying to be less concerned about it.  I'm running more frequently than I had been before (twice, often three times per week, about 12-15 miles total), and - after my annual physical - I learned that I've managed to bring my cholesterol levels under control in six months, primarily through exercise and diet (although I did try fish oil capsules for a few weeks, and then just gave up because I kept forgetting to take them daily).  So even with an extra 10-15 pounds primarily around the waistline, I'm comfortable and healthy.
Should I be better about what I eat?  Sure, I could.  But the truth is - I love food.  And I believe that everything can - and should - be eaten in moderation.
So I thought I would provide another look into my daily food intake when I'm at work.  I have a "rep" at work for my plethora of tupperware, and while it can be a bit time-consuming work (at least 20 minutes the night before to get all of this food prepared for the next morning, plus regular trips to the grocery store),  I know that I'm saving money by not having to buy all of this stuff prepared by someone else.
So here's a(nother) look at a typical day for me: 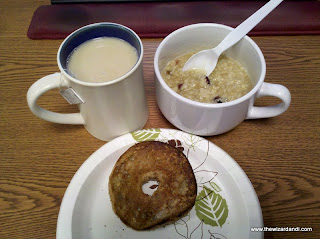 Breakfast - I like to start the morning with a mug of Earl Grey tea (with soy creamer), a half-cup of regular, one-minute oatmeal with two teaspoons of brown sugar and a handful of dried cranberries/raisins, and half of a wholewheat bagel (or English muffin - whatever is on sale for the week).  The bagel usually has soy "cream cheese," but today I decided on a small pat of butter. 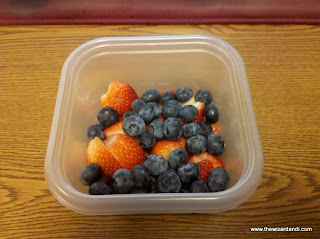 Second breakfast - I love berries of all types, but I am particularly fond of strawberries and blueberries.  And while I also like raspberries and blackberries, I find that the seeds are annoying and get stuck in my teeth, and the berries themselves don't last long in the fridge.  On this particular day, I had 8 oz of strawberries, and a quarter-pint of blueberries that were surprisingly sweet for this time of the season.  I'm probably making some locavores mad by admitting to buying fruit that probably got trucked in from god-knows-where, but damn! it tasted good. 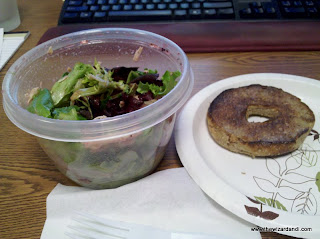 Lunch - A bowl of mixed greens, some shredded rotisserie chicken, and my favorite dressing (Ken's raspberry-walnut), and the other half bagel. 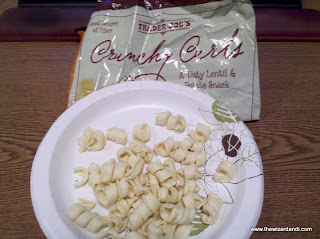 Post-lunch snack - I am a whore for Trader Joe's.  Yes, I said it - I'm a whore for Trader Joe's because I frakkin' love that store.  And I love that there is one so close to my apartment, and that I can make a quick stop there on my way home.  I had never tried these before - lentil and potato curls - but they are awesome and yummy.  Give 'em a try.  They're not as light as a potato chip, and they have a "grainier" texture.  But they really hit the munch-y spot. 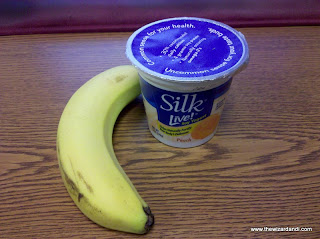 Second lunch - since finding out that I am lactose intolerant, I have had to endure years of sad substitutes for yogurt that are either too watery or just taste funny.  Thankfully, I've recently discovered that Yoplait is now making a lactose-free yogurt (woo-hoo!) and so my soy yogurt days are coming to a close.  Still, I had some to finish, so I cut up a banana and mixed it with a peach soy yogurt (one of the better soy varieties). 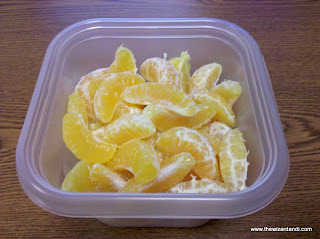 Second lunch dessert - I love winter for many things, but particularly for the citrus fruits that come into season.  On this particular day, I downed two navel oranges and three clementines. 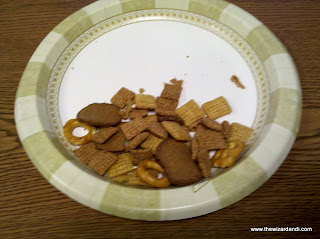 Post-lunch snack - Chex mix!  I always eat my Chex mix in order of preference, from least to most - I start with the pretzels (which I'll eat, but have never been a big fan), the white crunchies (I don't even know what you call them), the toasties, and lastly the shredded mini-wheats.  There's a whole lotta sodium in these, so I can't eat too many of them.  In one sitting. 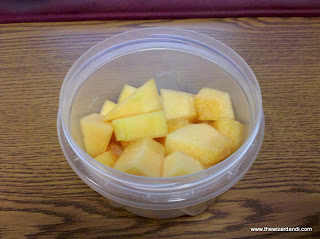 Afternoon snack - a tubful of cantaloupe.  Cantaloupe is one of my favorite fruits, but has been hit-or-miss lately. #firstworldproblems 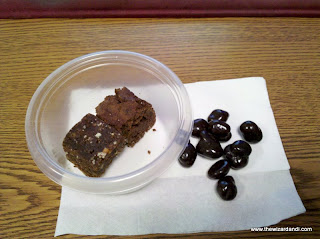 The oh-my-god-it's-four-o-clock-and-I-can't-wait-to-go-home snack - At Christmas time, our office becomes a breeding ground for sweet treats.  Since I don't have such a strong sweet tooth, I usually pack whatever I get into tubs and freeze them for later consumption in smaller quantities.  In this case, it's brownies, supplemented with a few dark-chocolate-covered cranberries.
And so ends another day at the office.  And thank god, because I'm hungry by 7, in time for dinner.
Posted by Christopher at 2/21/2012 08:40:00 PM 2 comments:

Like much of America - or so it seems - D and I have been watching Masterpiece Downton Abbey and have been enthralled by the show.  Downton's now in its second season, with the last episode airing this Sunday.  Then we have to wait a whole year before season three begins.

While we love the show, I also love the humorous recaps on AfterElton, which provide a snarky, ascerbic narrative that often make me snort my morning tea out my nose.  (Downton recaps are being written by Heather Hogan.)  For example:

SPOILER ALERT (if you haven't seen the episode yet).....

So Lady Sybil and Chauffeur Branson are madly in love and plan to elope.


Also hatching secret wedding plans this week are Sybil and Branson. She's all, "Blah blah blah wait" and he's all, "Blah blah blah IRA" and then she listens to her family have an inane conversation about whatever aristocratic thing and decides that Branson is her ticket to go backpacking across Europe like the bohemian she is. That's literally what she says to him: "You're my ticket to travel" and he kisses her and finally puts that one skill of his...to use and drives them away from Downton. But the joke's on him because guess who else can drive a car? LADY EDITH, BITCHES.

Email ThisBlogThis!Share to TwitterShare to FacebookShare to Pinterest
Labels: TV

Email ThisBlogThis!Share to TwitterShare to FacebookShare to Pinterest
Labels: music

Update on the Tyler Clementi story

I've written about the suicide of Tyler Clementi here and here, and have been following the story over the past few months.  It still really saddens me that this young man took his life after being cyber-bullied by someone who ridiculed him because he was gay.

The New Yorker has an impressive, lengthy article, essentially offering a play-by-play on the whole ordeal, the lengths to which Dharun Ravi went to torment his former roommate, and how he tried to cover it up.  It's a worthwhile read, and gives much insight as to what Tyler endured in the months before he jumped off a bridge and killed himself.  While I'm sure he never thought he could cause someone so much pain, Ravi comes across as an arrogant dickhead who deserves prison time and who will - and should - bear this burden for the rest of his life.

There's no doubt that people do stupid things.  Just this morning, I heard a news report about a car - likely with a drunk driver behind the wheel - that entered a highway going the wrong way and crashed, killing three of four passengers in the car, and the driver of a car going the right way.  A man tried to stab someone in a bar who made fun of him for drinking beer in a wine glass, and ended up killing someone else.  Yes, people do stupid things.  Young people do particularly stupid things.  But that doesn't excuse it.  Ravi was a stupid kid who's undoubtedly had to grow up faster than usual, now that he's faced with the prospect of five to ten years in the big house.  I continue to hope that justice will be served in this case, and while it won't bring him back, I hope that Tyler's family gets the peace and closure they deserve.
Posted by Christopher at 2/06/2012 09:35:00 PM No comments:

Back in the saddle

When I started my blog about 15 months ago, I was excited to try something new in an attempt to reignite whatever creativity I felt I had left in me.  I was obsessed with checking the number of page hits.  I celebrated 250 hits, 500 hits, 1000 hits and more.  My heart skipped a beat every time I saw there was a comment waiting for me to approve.  I smiled when I saw that someone, somewhere, far away, had taken the time to find my blog, even if it made little sense to me how someone in the Ukraine or Malaysia could have found me.  (Probably in an attempt to steal my identity, but I’m trying not to be cynical.)
When I started my blog about 15 months ago, I was a different man than I am today.  I was looking – no, starved – for attention, and I had this convoluted dream that someone would discover my blog, offer me a job as a writer, and make me famous.  I was desperate to find myself, my voice, and I thought that writing would help bring me back to life.  And every blog I wrote felt like a real accomplishment, even though I wasn’t necessarily writing what I really was feeling at the time.  It was about celebrating getting something done.
And then my life changed.
So my silence over the past few months hasn’t been so much because I’m busy (which I am), or that I haven’t had things to say (because I do).  It’s not because I’m sad (which I’m not), or don’t make the time (which I could).  It’s because I’m happy.
I’ve stopped obsessing over page view statistics and haven’t checked those for months.  I’ve stopped feeling obligated to writing because I want to keep my readers’ attention.  I’m not craving the attention or notoriety.  I harbor no misplaced dreams of becoming a writer.  (Okay, maybe I haven’t completely given up on that potential, but I’m not giving up my day job in the process.)   And so I took a break from writing because I didn’t feel that I had to write.
And now I want to.
So is it just like getting on a bike?  I don’t know.  Does it come back as easily?  No promises, but I’m certainly going to try.  I’m not going to pledge a schedule, because I’m a terrible procrastinator, so I’ll never stick to it.  Instead, I’m going to pledge to make time for me and make time to write.  And if that time is spent writing, or watching a crappy season of Desperate Housewives or the sublime Downton Abbey, or cooking up a storm in the kitchen…it doesn’t matter, because it’s about me again, and what makes me happy.  And I hope you’ll stay with me for the ride.
Stay tuned.
Posted by Christopher at 2/05/2012 10:59:00 PM No comments: